Meanwhile, 1 in 6 Americans is behind on paying their energy bills. In the United States, you are simply disconnected from the grid if you cannot pay the bill and if the air conditioning stops working at 35 degrees, there is a considerable incentive to pay. It has never happened before that so many Americans could not or would not pay the bill. In Europe, the number of defaulters is much lower, but that is the calm before the storm. The fact is that energy prices are rising much more steeply in Europe than in the United States. This is mainly due to the sanctions against Russia. It now ensures that Russia can earn twice as much from the sale of fossil fuels compared to before the Russian invasion of Ukraine. There are, however, a few logistical problems. For example, $10 million of natural gas is now flared daily at the border with Finland. That gas would actually have to pass through the Nordstream pipeline, but that is closed.

Europe is the biggest buyer in the LNG market and buys everything that is not tied up in contracts. To do this, the price of natural gas has to go up because the drought in China and the Amazon is causing demand for LNG to rise in other countries as well. Europe wants to have the gas storage facilities filled before the winter at all costs. The fact that this currently expensive gas is in storage means that the prices that are being paid now will soon be passed on to the consumer with tax and VAT. 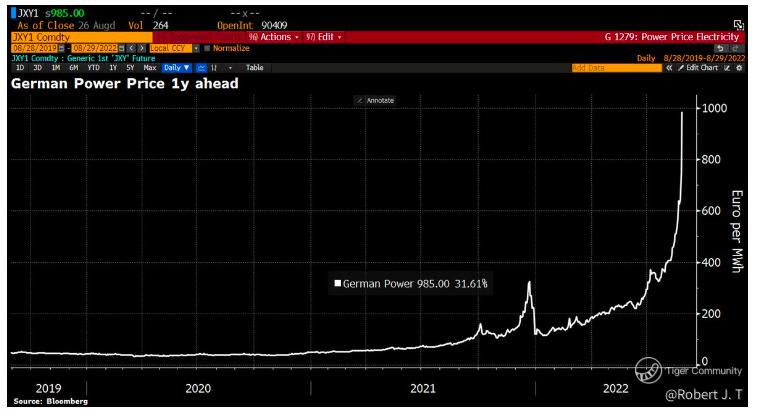 Until recently, electricity was still an alternative to natural gas, but that has long since ceased to be the case. Electricity prices have risen more than gas prices this year. British households were told last week that electricity prices will rise by 80 per cent in October. On the electricity market, prices have already risen much more steeply. Last year the 1,000 euro per megawatt (1 euro per kilowatt) mark was broken quite easily in France, Germany and the United Kingdom. These prices are so high that they point to supply problems next winter. As far as electricity supply is concerned, Murphy's Law is at work. The weather is dry and quiet. That means less hydropower and less electricity from wind. The drought is causing rivers to dry up so that coal can no longer be transported to coal-fired power plants. The heat means that several power plants (including many nuclear power plants) are no longer allowed to discharge hot water into the rivers and are therefore shut down. Furthermore, so many solar cells have been added that they regularly have to be switched off because the grid can no longer cope. The only spare capacity left is gas-fired power stations. And the Russian oil and coal boycott has yet to begin. 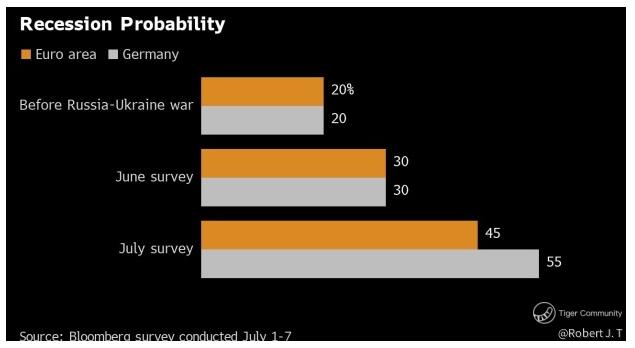 At current prices, at least half of Europeans will soon be unable to pay their electricity bills. Companies that consume a lot of energy will have to leave Europe, also because of the risk for the future. These companies produce many semi-finished products that will have to be purchased from outside the EU with expensive dollars. The supply problems caused by this are much bigger than supply problems caused by the shortage of semiconductors or the shortage of containers. It is no longer a question of a delay, but of things simply not being delivered. Normally, a doubling of the oil price in one year is enough to cause a recession. Then a tenfold increase in electricity and gas prices is soon good for severe depression. Now, in addition to gas, other things are liquefying under high pressure. Russia is still prepared to supply Europe with a lot of gas, but of course, it wants something in return. The various European countries (apart from Hungary) can reject Russian gas on principle, but that means that many governments will probably not make it through Christmas. Furthermore, it makes no sense for the ECB to cut interest rates from this point on. A deep recession is guaranteed with these energy prices and higher interest rates will only cause more capital destruction. 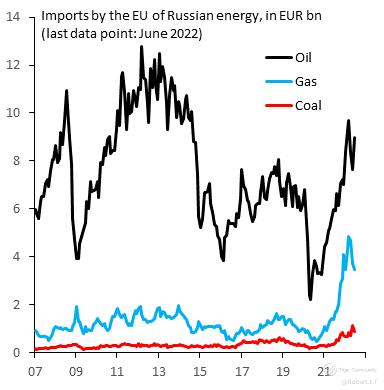