All is not well in the chip industry. Affected by soft demand for computers and consumer electronics, memory sales have declined. And this is bad news for memory giant Micron (MU).

On account of the deteriorating market environment, on last Wednesday, the chip maker announced that it is cutting down chip wafer production by around 20% compared to the prior quarter (fiscal fourth quarter 2022). The chip maker also said the demand outlook for 2023 is also not looking great with the company also mulling over further reductions in capital expenditures. This will be in addition to the 30% cuts already anticipated for fiscal 2023.

The market obviously did not react kindly to the news, sending shares down in the session. While the problems in the memory market are piling up, long-time Micron bull Rosenblatt Securities’ Hans Mosesmann remains in the semi giant’s corner.

“Micron’s updated wafer supply cuts in DRAM and NAND of 20% is aggressive and evidence that both end demand and inventory reductions at customers/channel are much more problematic than expected,” the 5-star analyst said. “Negative supply bit growth for 2023 in DRAM may be a record reduction for Micron in many years and in our view will accelerate S/D balance as the year plays out in a memory cyclical bottoming process.”

Noting the company’s “solid” balance sheet, and the fact there’s no fear of the “modest” dividend being taken off the table, Mosesmann believes the “mid-to-longer term prospects of memory/storage are quite good.”

In fact, heading into the year’s end, the shares boast an “attractive risk/reward” profile. As such, the 5-star analyst sticks with a Buy rating, backed by a Street-high $100 price target. The figure makes room for returns of 70% on the one-year horizon.

Out on Wall Street, 17 other analysts join Mosesmann in the bull camp, and with the addition of 4 Holds and 2 Sells, the stock makes do with a Moderate Buy consensus rating. According to the $65.87 average target, the shares will record gains of ~12% over the coming months. 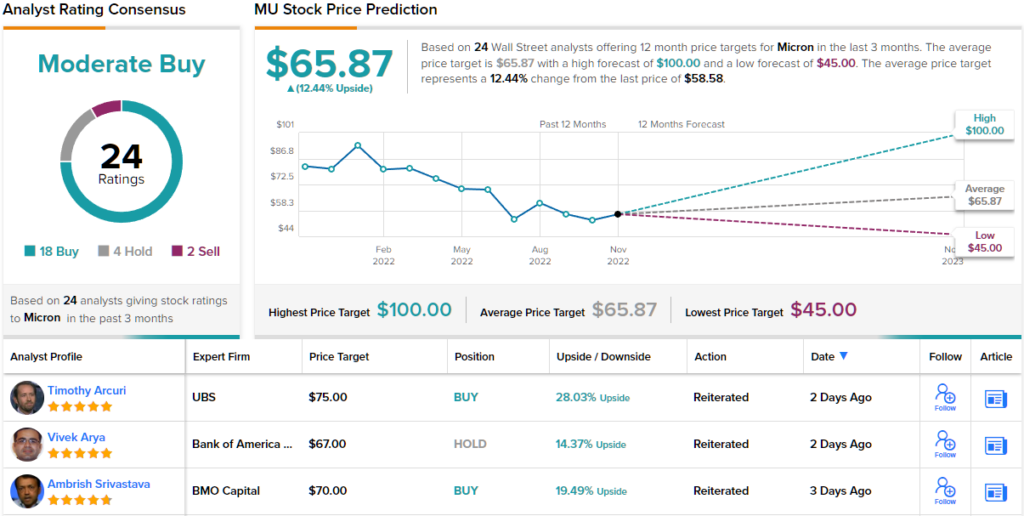