Bed Bath & Beyond stock is crashing after Ryan Cohen's exit

Shares of the badly struggling retailer cratered 45% in pre-market trading on Friday as itwas disclosed late Thursday Cohen's RC Ventures sold his entire position in Bed Bath & Beyond. Cohen, who is also the chairman of GameStop, had about an 11.8% stake in the company.

Cohen's exit caps off an otherwise insane week of trading for a retailer not too far away from entering a grave alongside Sears, Kmart, Borders, and Circuit City.

Bed Bath & Beyond stock skyrocketed by nearly 70% in intraday trading on Tuesday as a result of a massive short squeeze. BBBY stock finished that session up 29% in a volatile day. From Tuesday's close to prior to Cohen's disclosure after Thursday's session, shares had gained another 17%. 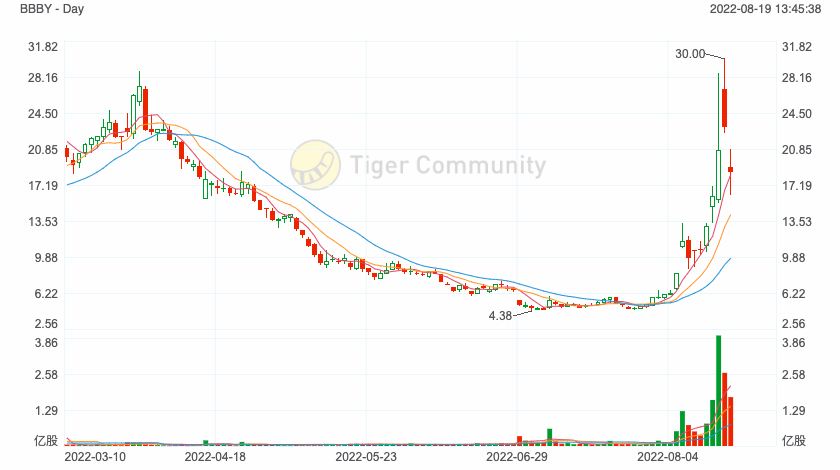 Cohen initially disclosed a 9.8% stake in the company in March, and the recent resurgence of BBBY stock involved the meme community once again rallying together to counter institutional forces that hold opposing views on the stock and the underlying business.

On Monday, Yahoo Finance reported on signs of financial stress at Bed Bath & Beyond locations in New York — and received colorful feedback from BBBY fans. On Tuesday, B Riley slashed its rating to Sell on Bed Bath & Beyond. Analysts at UBS and Wedbush also reiterated their sell ratings on the stock this week.

But with Cohen now out of the picture, the market may turn back to focusing on Bed Bath & Beyond's bleak near-term outlook.

And, as we've previously reported, it's brutal.

After a failed push in 2021 and most of 2022 into stocking stores with private label goods no one had heard of while also closing stores and firing workers, Bed Bath & Beyond ended its most recent quarter with a little more than $100 million in cash, tanking sales, weak store traffic, and a badly damaged brand.

There is currently an interim CEO running the business, which came about after the booting of former top Target exec Mark Tritton, and some observers are wondering whether vendors will continue to ship all of the merchandise that Bed Bath & Beyond needs for the holiday season amid the retailer's severely weakened financial state.

A man takes a closer look at coffee makers while shopping inside of a Bed Bath &amp; Beyond store in New York April 13, 2011. REUTERS/Lucas Jackson

In a filing on Wednesday, Bed Bath & Beyond said that it may have an announcement on a capital raise by the end of August.

"We think the fact that RC Ventures plans to liquidate its entire stake in the stock is a telling sign that there is less and less support of key fundamentally driven names in this gave," Wedbush analyst Seth Basham, who also has a sell rating on Bed Bath & Beyond stock, said on Yahoo Finance Live. "With that catalyst, we think the stock can reverse its course and start trading down."

Other top Wall Street analysts also reiterated that investors should beware on BBBY.

"The road ahead will be long and filled with a lot of challenges," UBS analyst Michael Lasser said on Yahoo Finance Live. "If they do come out of this challenging situation, the business could look a lot different — probably would look smaller."

On Thursday, Lasser reiterated a sell rating on Bed Bath & Beyond shares and slapped the stock with $3.50 price target, which assumed about 80% downside risk to the BBBY stock price at the time.