Cathie Wood acquired 28.7 Million $Invitae(NVTA)$ shares worth $122 Million. That's 0.68% of their equity portfolio (31st largest holding). The investor owns 11.48% of the outstanding Invitae stock. The first Invitae trade was made in Q4 2016. Since then Cathie Wood bought shares fifteen more times and sold shares on five occasions. The investor's estimated purchase price is $514 Million, resulting in a loss of 76%. $ARK Innovation ETF(ARKK)$

Genetic testing platform Invitae ripped 277% higher on August 10. It was truly epic. However, this stock was down by 45% in the following week by a severe sell-off.It appears the nearly 300% run-up on Wednesday was not about earnings but instead only due to a short squeeze. 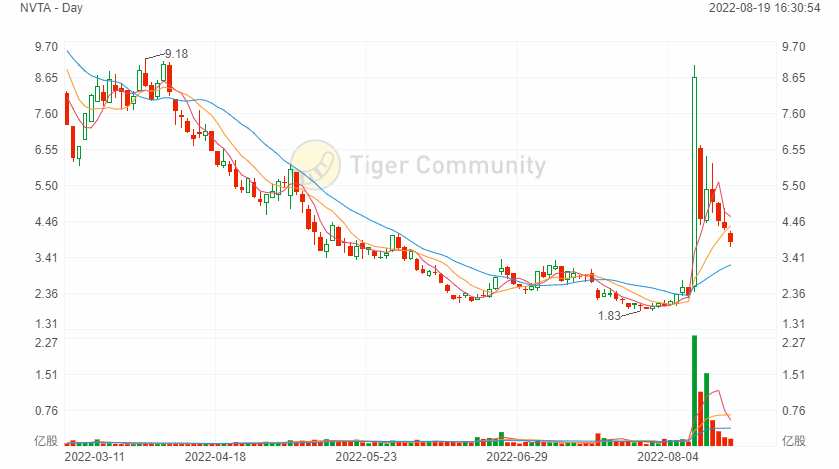 It was also truly bizarre. Invitaeannounced a strategic pivot and provided financial guidance on July 18. That included unflattering growth projections, replacing the CEO, laying off one-third of its workforce, and promising to keep cash burn to "only" $825 million in 2022 and 2023. Nothing changed when it reported second-quarter 2022 operating results on August 9.

Invitae was among the worst positioned. It spent money a little carelessly, prioritized revenue growth over every other metric, and wasn't delivering any financial benefits from achieving larger scale. From 2018 to 2021, the business grew revenue 212%, but only grew gross profit 63%. That's a problem when operating expenses grow 302%. The result was unsurprising: Operating cash outflows swelled 507% in that span.