$Coca-Cola(KO)$ released Q2 earnings before Tuesday open. As the best representative of consumer staples, it means a lot.

From Q2 earnings, Coca-Cola is convinced no longer an ordinary consumer product. For most consumers, it is a necessary like daily necessities, te Demand elasticity of necessities is quite low, that is, people are extremely insensitive to price changes. An 10% (probably a few cents) price raise will not change any demands. Although Coca-Cola is bearing inflation like others (such as $Wal-Mart(WMT)$ ), it can easily raise its price with sales volume still strong. 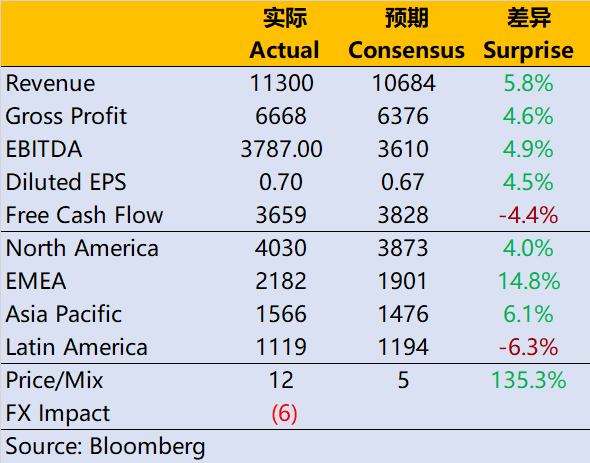 It is worth mentioning that Coca-Cola's withdrawl from the Russian market in March. Although there may be some finishing work to be done in Q2, it is obvious that the overall sales impact is not great.

Geographically,The income growth rate of Europe, Africa and the Middle East was 8.1%, ranking second among the four major regions, and beat market estimates. However, the company expects the impact on EPS to be about 0.03 US dollars.

In a word, Coca-Cola's users are too sticky, almost becoming a necessity, and its price elasticity is very low.

Of course, although inflation is high in the United States at present, the overall salary level is still not low, which is why consumer goods can still maintain strong purchasing power. If Coca-Cola's performance has declined, it may be that the recession has really started.